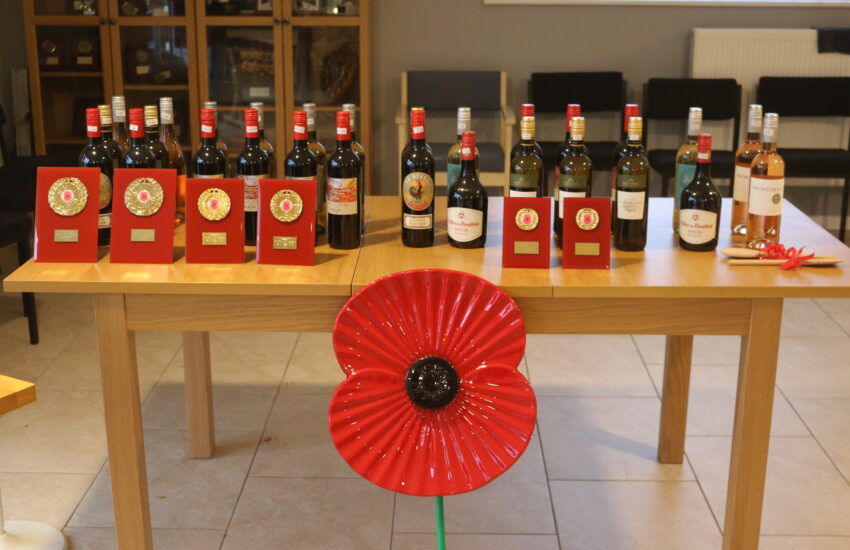 The 12th Cobbetts Poppy Appeal Doubles was eventually held at Burridge on Sunday, December 13th having been postponed from Remembrance Day. Coronavirus restrictions meant we were limited to 20 teams. Half of the places were allocated to teams entered by the club’s own members and the other half offered to the clubs who had supported us the most in previous years. Unfortunately, no breakfast bacon sandwiches or lunchtime food but there was plenty of tea, coffee, hot chocolate and a few mince pies (thanks Graham) to warm players up on a very damp day.

There were 5 morning leagues of 4 teams with the top 8 teams qualifying to play in the main competition in the afternoon. It worked out perfectly with the 5 league winners, all winning 3 games, being joined by the only 3 teams that won 2 games. David Franco Cruz & Marc Franco Llado were top seeds with +27. 2019 champions Phil Bradshaw and Steve Daykin were on +21 as were Alan Forse and Steve Brickell from the home club. Also on 5 wins were Mike Tull and Harrison Ash (+18) and Steve and Karen Lombard (+17).

In the afternoon knock-outs, last year’s semi-finalists Mike & Harrison defeated David and Marc while in the other semi-final the defending champions, Phil and Steve, were beating Dave and Matt.

Slightly earlier than forecast the rain, which fortunately had only been light for much of the day, turned much heavier around 4:30pm just in time for the finals! Despite the atrocious conditions, the final saw a great game with some excellent pointing and shooting from both teams. Mike and Harrison eventually came out on top to take the title with a 13-10 win.  The main consolage was won by Tony and Peter Kidd who defeated Steve and Karen Lombard in the final.

Well known Cobbetts members Lyn and Mike Porter, who have recently moved to Devon, returned to their ‘old home’ to win the Plate competition. They defeated the Handcross/Worthing combination of Nigel Sibbring and Martin Gordon in the final, having narrowly beaten fellow Cobbetts’ members Dave and Richard 13-10 in the semi-finals.

The Plate Consolage saw the mother and son combination of Karen and Mark Robertshaw defeat Frank Charlesworth and Christine Peat. Thank you to Frank and Christine, always great supporters of the cause, for bringing along some Christmas items to sell, with all proceeds going to the Poppy Appeal.

The Wooden Spoon competition saw Frankie Bennett and Jackie Corp win all 3 games in the 4 team league to take home the spoons (and some wine!).

A cheque for £250 was handed over at the end of November, to ensure that the Royal British Legion had a donation from us in their 2020 accounts. This was possible due to the wonderful support from players, both from Cobbetts and several other clubs in the region, who gave generous donations and bought poppy badges. Thanks to the further generosity shown by everyone at the competition it looks like we have a very good chance of at least matching that amount when all the sums are done. Achieving over £500, with half of the usual entries, will be a great achievement.

Update 23rd December A further cheque for £350 will be delivered on Christmas Eve to our local Poppy Appeal organiser taking our total donation to a fantastic £600. Thank you for your amazing support and we hope to see you all again next year, along with all of those who sadly missed out on playing this year.