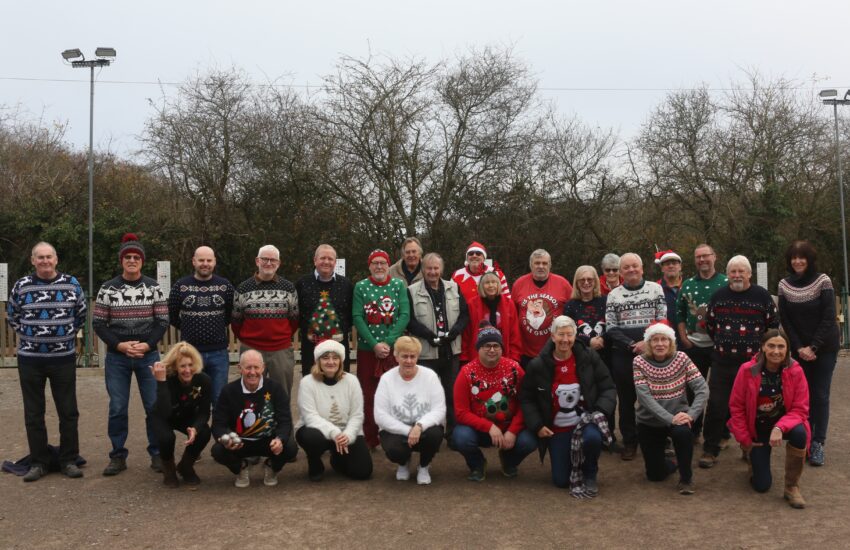 There were 26 players present for the Cobbetts Christmas Melee. We also had a visit from Charles Skipwith who formed the club in 1974, playing in the car park of Cobbetts Restaurant which he owned in Botley (now Regginas). This was the first time we had seen Charles since he sold the restaurant in 1995 and moved to France in 2000 so it was lovely to catch up with him again and reminisce about the old days. He presented us with the trophy that used to be played for every Bastille Day back in the 1970s and hopefully we can resurrect this competition!

After tea/coffee and mince pies, play got under way at 12:30 and we played 4 rounds of 25 minutes. After the third round it was very close with experienced players Dave and Alan, along with two of our newer members Patrick and Paul, all on 3 wins. Dave was drawn to play with Vi against Patrick and Chris so it was likely the eventual winner would come from this game. A perfect spot carreau from Chris helped them to 5 points in the second end and a 9-0 lead! Dave and Vi fought back strongly to go 11-9 ahead with the final end to play. Chris and Patrick had one point on the ground when Chris went to play his final boule so were still trailing 11-10. A great last point from Chris gave them two more points to snatch victory 12-11!

Alan suffered a 6-9 defeat which put him out of the running while Paul, playing in what looked like a strong team with Rich and Graham, went down 3-10.

The competition ended with 8 players on 3 wins (3 of them on +14!). Only Patrick won all 4 games which meant he took home the Cook’s Christmas Cup for the winner of the competition with Dave runner-up. The Cobbetts Curry Cup for the highest placed new member (other than Patrick!) went to Paul.

A very enjoyable after match American supper followed with Ali setting a Christmas themed quiz. Thank you to all who helped provide a lovely spread of food.

Happy Christmas to all our members.