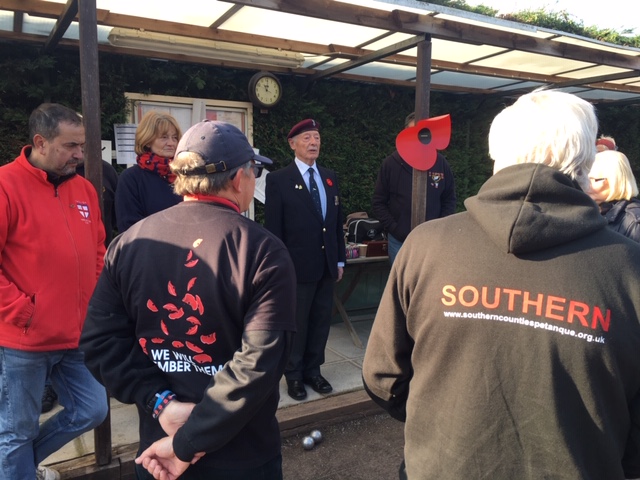 The 11th Cobbetts Poppy Appeal Doubles was held at Burridge on Sunday, November 10th and the aim was to repeat the £1000 raised in 2018. The Burridge Club again allowed us to use a small area of car park which enabled us to accept an extra 4 teams giving us an entry of 42 teams. Sadly 6 more teams had to be turned away! After all the recent rain we were lucky to get a sunny day although the temperature dropped rapidly as the semi-finals and finals were played after the sun had set.

There were 9 morning leagues of 4 teams and 1 of 6 teams. The top 16 teams qualified to play in the main competition in the afternoon, the next 16 in the plate and the final 10 in the wooden spoon. After the morning leagues, last year’s winners Karen and Callum Lombard from River Hamble were top seeds with 3 wins +32. There were plenty of Cobbetts’ players through with Steve Daykin (and Phil Bradshaw from Bath) in second place with 3 wins +31 and also through were David Franco Cruz (with Dave Plumhoff), Mike Tull (with Harrison Ash), Dave Stubbs & Richard Greeves and Marc Franco Llado (with Louis Rinaldo).

More success for Cobbetts in the afternoon with last year’s runners-up, Dave and Richard, beating David and Dave 13-12 in the quarter-finals before losing to Phil & Steve in the semi-finals. Mike and Harrison also reached the semi-finals before falling to Paul & Sheila from Fareham. Despite Phil playing with an injured hand, he and Steve went on to beat Paul & Sheila in the final.

A Cobbetts win in the Plate competition with Lee & Diane Redfern defeating the River Hamble/Ship combination of Steve Lombard & Dave Lucas in the final. Steve and Dave had beaten another home player Rod Bennett, partnered by Danny Corp from Shedfield, in the semi-final.

The Plate Consolage saw another Cobbetts player in the prizes with Alan Forse (and Chris Chubb from Muscliff ) winning the final against the City of Bath team, Gay and Jeremy.

The Wooden Spoon competition saw Steve Love & Sue Sandy just miss out on the top prize, their 3 wins +17 not quite enough to stop the two Tonys, Kidd and Mann, who finished on +20.

Thanks to the great support shown by club members and all the visiting players it looks like we have a very good chance of reaching the target of £1000 for the Poppy Appeal when all the sums are done.