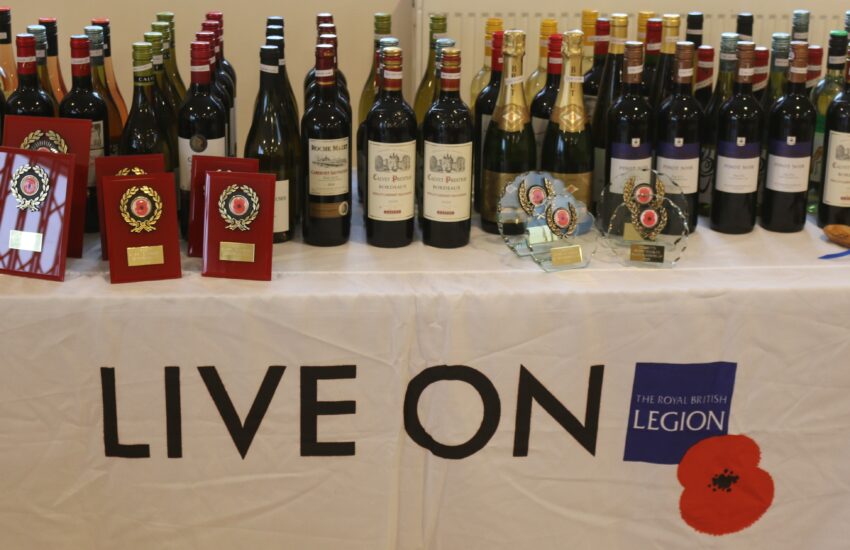 The 13th Cobbetts Poppy Appeal Doubles was held at Burridge on Sunday, November 14th and the aim was to repeat the £1000 raised in both 2018 and 2019. After the coronavirus restricted entry and delayed competition in 2020, it was great to be back with a full house of 40 teams on Remembrance Sunday. In the run-up to the competition an extraordinary number of players had to withdraw for various reasons and we send our best wishes to all of you and hope to see you next year. We did manage to find replacements for all of them to make it worthwhile setting up an extra terrain in the car park.

There were 10 morning leagues of 4 teams. The top 16 teams qualified to play in the main competition in the afternoon, the next 16 in the plate and the final 8 in the wooden spoon. Last year’s defending champions Harrison Ash and Mike Tull were dealt a blow when Mike had to withdraw on Saturday evening because of a sick daughter. One of Cobbetts’ newest players, Steve Mills, agreed to step-in although he’d only been playing a few weeks. What a competition debut it turned out to be, winning all 3 games in the morning and finishing as 5th seeds for the afternoon! Last year’s runners-up Phil Bradshaw from Bath and Steve Daykin from the home club were 3rd seeds on 3 wins +29. It was great to see the ex-Bordon player Steve Snudden again, playing with Mark Robertshaw, and he made the long trip down from Wales worthwhile with 3 wins +28 and 4th seeding. Top seeds on 3 wins +32 were Karen and Callum Lombard with Steve Lombard and David Franco Cruz close behind on 3 wins +30. Other teams on 3 wins were Dave Stubbs & Richard Greeves, Robert Wyles & Viv Tilbury (also playing in her first competition) and Nigel Sibbring & Martin Gordon.

The afternoon saw the two Cobbetts debutants, Steve and Viv, both win their first round matches before losing out at the quarter-final stage. A tremendous achievement for them both. Also new to petanque was Millie Perkins, playing with Dave Plumhoff, and they also lost in the last 8. Dave is off to Spain this week to play in the World Championships and we wish him well along with the rest of the England team. The other team going out in the quarter finals were Dave Stubbs and Rich Greeves who narrowly lost a very hard fought game with Steve Daykin and Phil Bradshaw 13-10.

Steve and Phil went on to beat David Franco Cruz and Steve Lombard 13-6 in the semi-finals. With some very consistent pointing, Mark Robertshaw and Steve Snudden put out the top seeds, Karen and Callum Lombard, by the same score in the other semi-final. In the final Steve and Phil came out on top 13-4 to regain the title they won in 2019.

The Main Consolage was won by the home team of Graham Blake and Alan Forse who defeated Nigel Sibbring and Martin Gordon in the final. It was nice to see Nick and Mike Hillier back playing again and getting through to the Main Consolage semi-finals. Nick and Mike were part of the Botley Butchers team that played in the 6-a-side League from its formation in 1985 through to 1993, winning Division 1 in 1986 and 1989.

The Plate competition was won by Mike Powlesland and Tom Williams from Portchester who only agreed to enter on Saturday morning after a late withdrawal by another team. They defeated Nick Corner and Steve Davies in the final. Good to see Nick back playing after a long illness and both players resplendent in their poppy shirts! Semi-finalists were Paul Leverett partnering another new Cobbetts player Paul Bone, and Christine Peat and Frank Charlesworth, who was wearing another fine addition to his collection of Remembrance Day shirts. The Plate Consolage was won by Paul and Sheila Hayward who beat home players Steve Love and Sue Sandy.

The Wooden Spoon competition was won by Roger Greenhalgh and Stan Cox from Crondall who defeated Rod Bennett and Maureen Lee in the final. The spoon consolage was won by Diane Slater and Michael Moore.

Thanks to the great support shown by club members, all the visiting players and donations of money and raffle prizes from players around the region, it looks like we will again have reached the target of £1000 for the Poppy Appeal. There were so many helpers throughout the day but a special thanks to Chris Barron who was in the kitchen from 8 a.m. through to 8 p.m.

The raffle was amazing with so many prizes, all donated, including a wonderful hamper from Janet Dalton, a bottle of Courvoisier from Chris Barron and many, many more. A big thank you to Frankie Bennett for selling far more numbers on the raffle board than we had expected and to Richard Greeves who constructed a splendid field of 100 poppies for the ‘Pick a Poppy’ competition to mark the 100th Poppy Appeal. A special mention also for David Franco Cruz who baked a selection of wonderful cakes and gateaux (just a small sample shown in the photos below!). The sale of these alone raised well over £100.

Last but not least, a big thank you to Pen-y-Coed Petanque for making the long journey down from Suffolk to display their extensive range of petanque boules and accessories. Pen-y-Coed website

We are pleased to announce that an amazing £1,360 was raised for the Poppy Appeal 2021. The cheque was presented to our local Fundraising Organiser, Daimon, on Tuesday, December 7th.