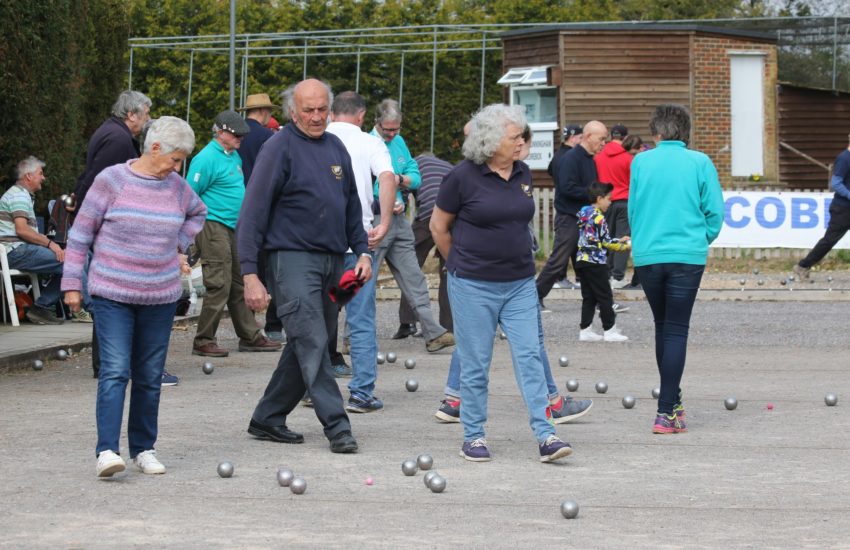 A full-house of 38 teams for the annual Cobbetts Open Doubles at Burridge. The forecast was dry but cloudy but fortunately it was much better than that with the sun shining for much of the day. There were teams from all parts of the Southern Counties region along with players from London, Bath and South Wales.

There were 8 leagues of 4 teams and 1 league of 6 for the morning play. From these 9 leagues there were 8 league winners undefeated on 3 wins and these teams were joined in the main competition by the other league winner and 7 league runners-up. The final game in the 6 team league was between two teams that had won their first 2 games, Callum Lombard & Barry Wing and Steve Daykin & Jamie Brooks. This was a very tight, long drawn out affair eventually won by Callum and Barry at around 2:15pm. The late start to the afternoon play was then not helped when the seeding paired these two teams to play each other again in the first round of the knock-out! Again Callum & Barry won after another long, close game.

Top seeds for the afternoon were Vince Wills and Dave Plumhoff with 3 wins +30 closely followed by the Fareham team of Paul Hayward and Dave Kilshaw on +28. Both these teams won their opening two games in the afternoon before Paul and Dave fell at the Semi-final stage to Callum and Barry. After a narrow 13-11 victory in the quarter-finals against home team Dave Stubbs and Richard Greeves, Dave and Vince then beat Steve and Karen Lombard in the other semi-final. Even with the clocks going forward, the final was largely played under floodlights with Callum and Barry coming out 13-8 winners. This meant Callum retained the trophy he had also won in 2018 playing with Steve Daykin. This time around Steve had to settle for winning the Main Consolage with Jamie, defeating Sam Thatcher and Graham Elcome in the final.

The Plate competition was won by Nigel Sibbring and Martin Gordon who defeated Bob Bish and Sheila Hayward in the final. The Plate Consolage saw 7 year old Axel, playing in his first ever competition, reach the final playing with his dad David before losing to another pair from the home club, Steve Love and Sue Sandy.

The 6 team wooden spoon competition was run as a 3 game ‘snake’. It was won by Dave Lucas and Marc Franco Llado, the only team to win all 3 games. Runners-up were Stuart Cursley and Celia Rawlings with 2 wins +0 just ahead of Rod and Frankie Bennett who were on 2 wins -3.

Many thanks to Lyn Porter and her helpers in the kitchen and to all the other club members who helped on the day and also on the Friday before to get the terrain ready.